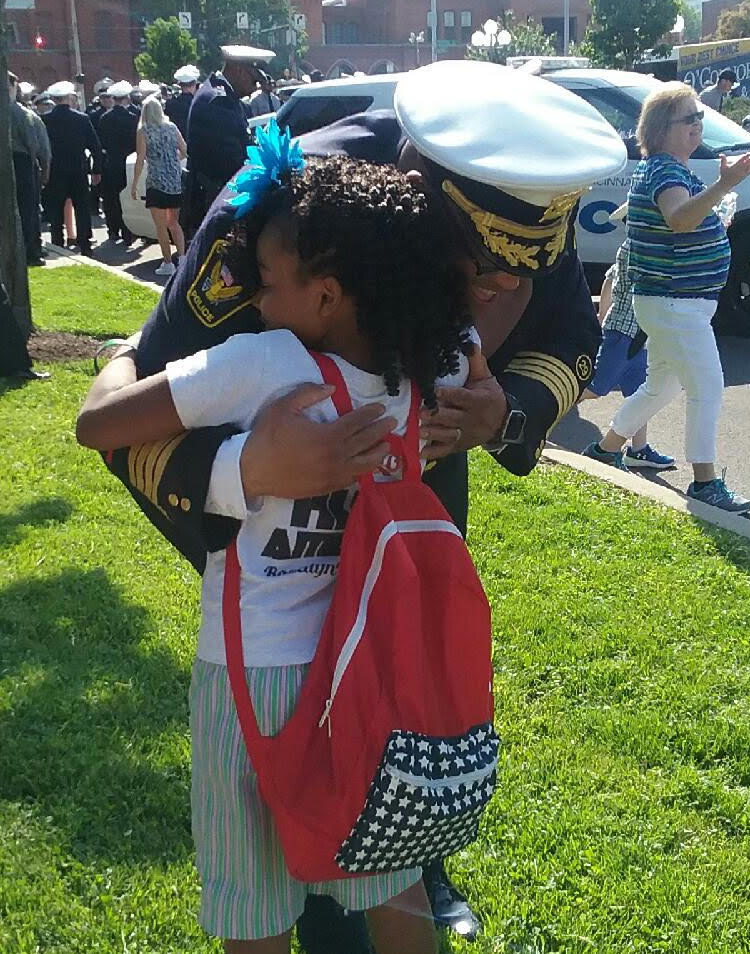 11-year old Rosalyn — @RosalynLoves > is in her third year of a mission to give hugs to policemen in all 50 states!

We ask nearly a million Americans to put on police uniforms daily and enforce the norms that we have agreed upon. The police are us, not against us. Americans behind the badge. Low income, crime prone areas need policing more than any other areas. It’s a fact that Policemen treat people differently by profiling. It causes resentment among minorities who are detained at a much higher number than whites. That resentment and camera phones have revealed and documented police actions with Americans. Some Americans were tragically killed by police, most were resisting arrest. These cases became national news.

There are millions of police encounters by nearly a million police officers in the US every year. Policemen are heroes by donning the blue and going into dangerous encounters and making split second, life, or death decisions. All to enforce our norms and keep us safe. Policing is the reason we can lay our head down at night and sleep soundly.

It’s very very unfair to condemn our local protectors coast to coast because of these incidents. It’s especially concerning that some politicians expressed opinions that are anti-police.

Much work is needed to make America a place where our protectors are less suspicious. To make this possible, the crime in urban areas, and the inner-city, which are predominantly black Americans needs to be reduced. The scope of the needed changes is large and wide.

Each urban, inner-city area in every metropolitan area in America is an environment where minorities become trapped by their circumstances. The most powerful figures in these areas are the millions of Mothers of Color that do the best with what they have. They provide and put the fear of God in their children to stay in school and away from crime. But, it’s not enough. Teenage pregnancy, single parent homes, welfare and lack of educational choices trap many minorities in these areas. Young black men grow up and as their future prospects fade, they can more easily justify turning to crime. Millions escape these areas. But those who are trapped and then engage in criminal activities is high. High enough to create caution by Police that often causes policemen to racially profile. Especially where police patrols overlap these low-income areas. Profiling is not by any means right, nor is it necessarily racist. The tension caused by profiling has reached a flash point. Minorities, especially black men, are detained more frequently than white men. The frustration of being detained and camera phones have documented police encounters. The national news amplified the events.

A proposed 21st Century Homestead Act that will make relocating from urban areas to federal lands granted to States more affordable and within reach. New towns or expanded suburban areas will give Americans new opportunities to build something new together. Another choice that belongs to them and allows culture to expand.