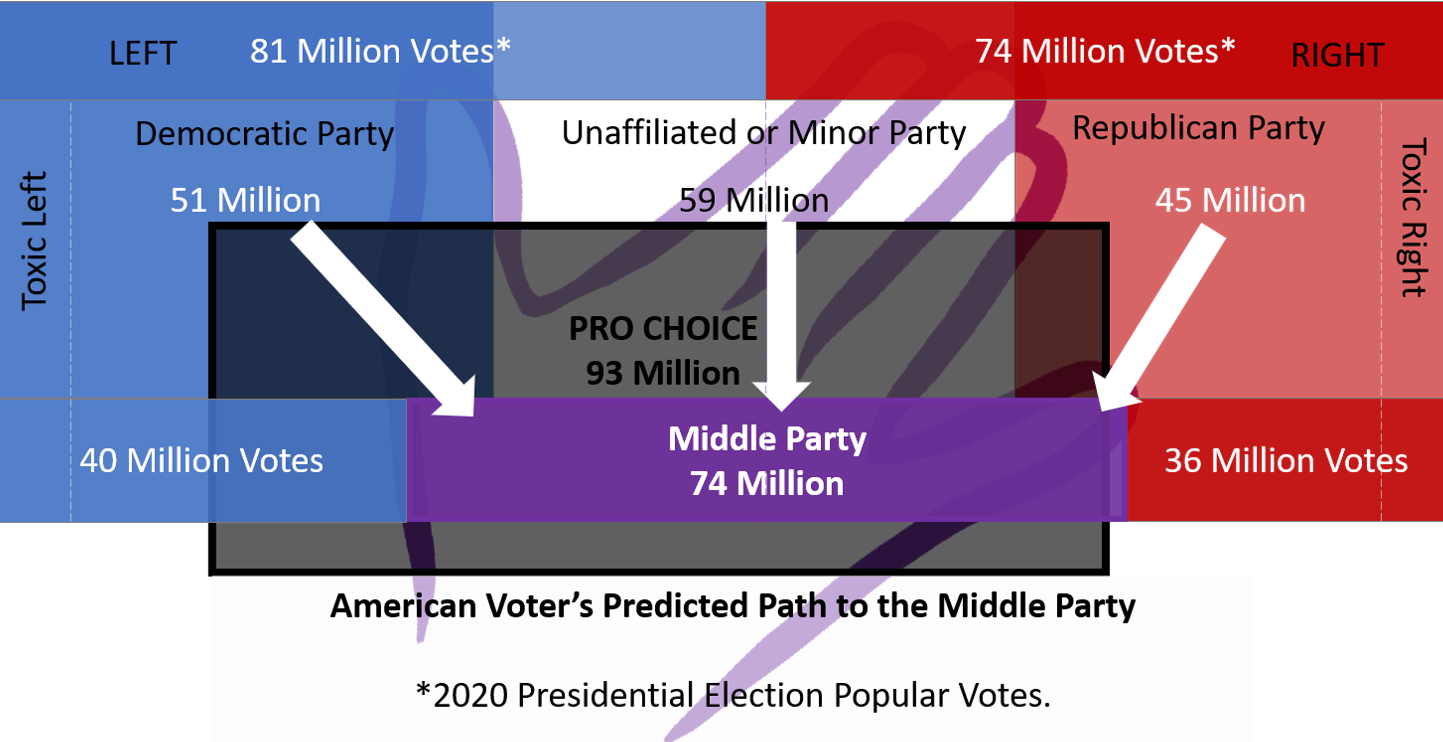 The Democratic and Republican Parties each represent a minority view of national priorities. We choose one of these parties to operate the federal government because they are the only choices. Regardless of the national priorities of most Americans.

The Middle Party national political campaign is based on the need to find and document common ground by identifying the national priorities of the majority of Americans. The obvious place to start is each of our positions on abortion. Most Americans believe we can’t return to the way things were before 1973 when aborting a pregnancy was criminal, unsafe and women were dying in secret non-medical rooms and girls were dying alone in their bedrooms. The position that Pro Choice doesn’t mean pro abortion will carry us forward.

The graphic above illustrates how I believe America’s Pro Choice majority can lead Americans move to the middle where common-sense priorities like supporting police, gun rights, lifting Americans out of poverty, protecting senior healthcare, voter integrity, and defending the US Constitution already exist and are the common ground Americans can share and use to return governing to the people.

All ideas outlined in a Podcast supported list of Articles at Common-Sense, Common Ground >

I believe the United States can no longer endure, nor should we tolerate the continued polarization of only a red or blue party. We’re much more diverse of a nation to only have a choice of just black or white, neither one representing the national priorities of the majority of Americans. A new political party is needed to represent that majority’s position. Third parties, and the Democratic & Republican parties, have all failed because they didn’t represent that majority. The Middle Party will have a well-defined position and will represent the position of most of us. Whatever that position may be. Parties, all claiming to represent the People have completely tuned the will of the People out.

There are some key reasons our nation has arrived here. Leveraging these points will help this movement succeed:

The reason that I believe another conservative party will succeed is outlined in Common-Sense, Common Ground articles. It starts by embracing Pro Choice to bring more Americans to the Middle from both sides. Success continues, then progresses by agreeing on a list of common-sense principles outlined between now and Labor Day 2021 in those articles.

Believing 3/5ths of Americans can agree on anything is a bold statement. This is not an overnight campaign. This is a election period by election period on-going process that will need years to achieve and will need to be rinsed and repeated as needed, so that the priorities of the American majority are always represented.

I know for a fact that I’m not the only one that feels this way. Ask yourself these questions.

Does the US political party that you’ve chosen continue to represent your priorities?

Do you believe it’s time for another choice?

Is it time for a US political party that speaks for the powerful majority of Americans that recognize common-sense?

Do you believe the two-party system is broken?

Are you seeking Hope?